With a strategic location, Myra Condo will still be in demand

Myra is a stylish apartment in the Potong Pasir area of ​​Singapore, it was built by the prestigious developer - Selangor Dredging Bhd (SDB). The project is expected to be completed by November 30, 2024. At this point, it has sold more than 18 of the 85 units, and the developer is confident that there will still be demand due to the strategic location.

Overall, Myra Condo is located on a freehold parcel on Meyappa Chettiar Road and Woodsville Close in District 13. Consisting of a 12-story tower with 85 residential units. This apartment has a gross development value (GDV) of S$150 million (RM455.62 million). Units here will cost between S$1.06 million and S$3.06 million, with 1 to 4 bedroom units that will have built-up areas ranging from 474 to 1,324 sq ft.

As mentioned above, Myra Residences is strategically located between the CBD and the east side by highways such as the Pan Island Expressway (PIE), Central Expressway (CTE) and Kallang-Paya Expressway Lebar (KPE). Especially it is located only 150m from Potong Pasir MRT station.

This project is also close to shopping centers such as Macpherson Mall and The Poiz Center; educational institutions such as St Andrew's Secondary School and Junior College, Bendemeer Primary School and Pei Chun Public School.

Along with that, the apartment is also close to health care and sports facilities such as Tan Tock Seng Hospital, Farrer Park Hospital and Toa Payoh Sports Center; and parks such as Bidadari Park and Aljunied Park.

Immediately see the community facilities around Myra Condo at URA Master Plan, you will understand more about the value of this apartment and why it is so loved.

Designed by UK-based Pitman Tozer Architects and Singapore-based JGP Architecture, this condo is built around the principles of livability, style and human values.

Myra Freehold is also expected to bring a living space filled with trees and the freshest air for everyone's life. At the same time, the same surrounding areas will bring a breath of fresh air, filled with green lungs and eventually become a cyclist and car friendly community.

The origin of the name Myra is derived from a tall Indian palm with fanned leaves, named "Palmyra". According to group executive director Teh Lip Kim, they want every resident who steps into Myra to feel the feeling of greenery, with layers of trees, ferns and shrubs. 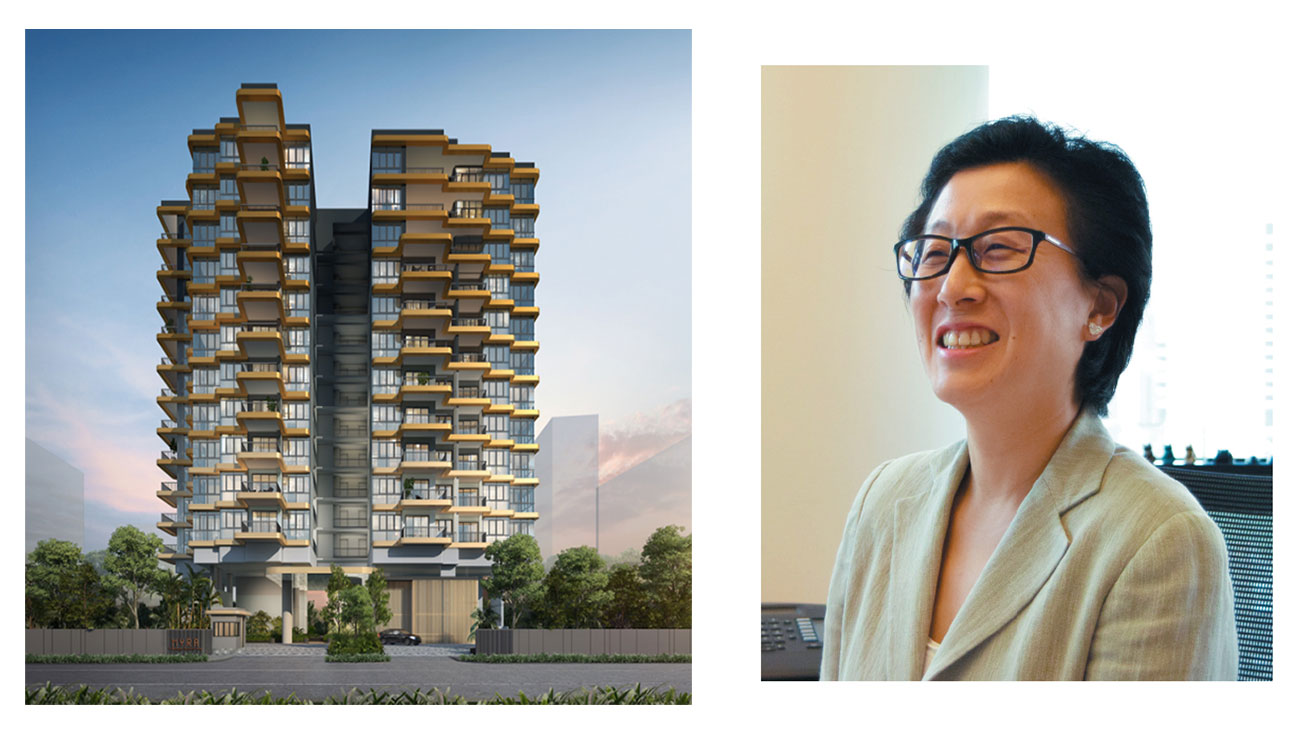 Ms Teh: This project will be suitable for those looking into asset preservation and longer-term appreciation (Photo by SDB)

According to Ms. Teh Lip Kim, although during this pandemic, there have been difficulties in implementing the project, due to travel restrictions; but they used technology by visualizing growth and placement through video calls and managed to achieve their goals through trial and error. This is an admirable effort on the part of the project manager.

Ms. Teh also said that “This project will be suitable for those who want to preserve their assets and increase their long-term value, which ultimately sets them apart from rental properties.” According to reviews, Myra is set up with modern and innovative elements, aiming to cater to young couples with or without children, young or married couples living with parents, large families. generations and parents buy for their children.

The developer also explained more about the exterior shape of this apartment. Myra will make a special feature from afar with its soft rounded facade and delicate colored aluminum ribbons. Plus, it changes tone from bottom to top - from champagne on the lower floors to pale yellow on the top floors. You can see that the horizontal ribbons also provide sun protection for both the occupants and the building, as well as the balcony and air-conditioning ledge.

Explore the project details at Myra Unique Concept, for more information regarding the design, layout and original concept of this project!